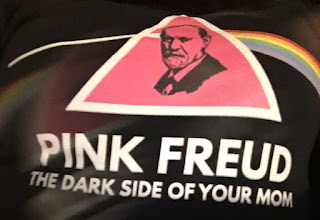 (Image: Mama ain’t happy with these fascist laddies, which is why they are the way they are.)

These days a desperate cry for love can be heard coming out of Bremen. A pro-Germanian arsehole fell flat on his face. Maybe this politician of a notoriously fascist party was just too plain to pull his hands out of his pockets to break his fall. One might be lead to see this as a typical case of a retro-Nazi in our times, if there weren’t the reactions of other political clowns and the some media outlets.

Within seconds of it happening, the right-wing extremists turned it into an assassination attempt against one of their members. This little man – himself a rabble-rouser and responsible for public calls to arms – makes himself out to be the victim of leftist violence. The bum wad of our outdated nation, the BILD tabloid, drives the republic into hysteria. And this results in a rash of no-more-violence-and-all-the-best messages in the (anti)social media.

Even the German president dares to be stupid and condemns the deed that never really was: no 2-by-4 as an assault weapon, no boots to the head of the fascist and no builders as eye witnesses. Those are the conclusions that the investigation by Bremen’s state prosecutors arrives at. These Nazis in loafers once again make themselves out to be the victims, while they actually are the culprits.

It is these ‘pro-Germanian arseholes’ and their eastern offshoot, the ‘Effluent of German Patriots’ in particular, who are cranking up the spiral of violence. Their language is one of ferocity and exclusion, their followers are blatantly violent and are all too often shielded or supported by likeminded public servants in the police and other authorities. One might be tempted to conclude that violence will cause more violence, but in these times of quasi-religious digital hypnosis, causality tends to go up in a puff of nonsense.

The far-right radicals can thank the SPD, Greens and confused centre-of-the-road wafflers as well as profit-hungry media for yet another propaganda win. Just like the AFA of yore, the good old 2-by-4 has become the victim of calumny. The intelligence services can continue to support the right-wing scene using funds for undercover investigations, and far-right stalwarts will continue to be welcomed with open arms in the police forces and the Bundeswehr.

This will have fatal consequences on the environment, society and the economy, but Germans have always had a knack for putting their foot on the gas pedal, even if the CO2 emissions will suffocate their own children and grandchildren. The cultivation of traditions and patriotism is currently all the rage. We are seeing what happens if Mother Nature no longer loves us and our cry for love is transmuted into acts of violence.

But violence might be a solution after all. What democracy also means is that ‘not all of us can do what we want’ and ‘not every agitation and untruth is freedom of speech’. In that respect, violence as a form of self-defence might be legitimate. But because the rule of law is continuously undermined by the AfD and even worse (CSU, diesel fraudsters, internal intelligence services, Christian organisations etc. …), all we can do is join Jens Spahn (CDU) and Christian Lindner (FDP) in being against Nazis and start going to see a shrink or taking strong antidepressants. At least until the day we end up clinging to the last 2-by-4 as we float in the oceans affected by climate change.

Consumer fascists are incapable of opposing actual fascists: They are just a sublimated projection of the murderous original. There is no such thing as the truth. Politicians have good reasons to be afraid: nobody needs this bunch of clowns. By fostering and enforcing neoliberalism, they have made themselves obsolete and are now waking up in the middle of a neo-feudal stampede that threatens to run human civilisation into the ground.

Pity and dismay … are out of place here. Interpretation of dreams and carefully trying to work our way back from the problems to their possible causes might be more helpful. But who likes going to the doctor until it is absolutely necessary and as long as fuel prices are still bearable.

+Why has there been a de-facto ban on the teaching of history?